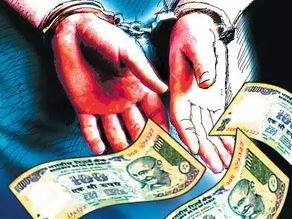 A woman Inspector of Police, a Sub-Inspector and two head constables have been removed from service for reportedly taking hefty bribe for releasing a sand-laden lorry, which was detained at Aralvaimozhi in April 2017 though the sand was transported with proper permission.

As incidents of sand smuggling from Tamil Nadu to Kerala increased manifold, 33 check-posts were created across Kanniyakumari district, which were manned by policemen round-the-clock. Moreover, flying squads were also formed to monitor the policemen posted in these check-posts.

When a sand-laden lorry, proceeding from Puducherry to Kerala, was intercepted by a flying squad led by Sub-Inspector Senthilvel near Aralvaimozhi check-post on April 30, 2017, they detained the lorry saying that the driver did not carry proper and valid documents to transport the mineral.

The sand-laden lorry was then taken to the Aralvaimozhi police station.

However, Inspector of Police, Aralvaimozhi, Vanitha Rani, did not register a case in this connection and the vehicle was released after three days.

As the sand transporter forwarded complaints to the Vigilance and Anti-Corruption Wing accusing the police of having demanded hefty bribe to release the lorry though he had brought the sand only after obtaining proper permission, inquiry against the flying squad members and Vanitha Rani commenced.

Meanwhile, the then Superintendent of Police Dharmarajan shifted Senthilvel out of the flying squad, which was subsequently dismantled.

When the investigation by Vigilance and Anti-Corruption Wing confirmed the charges levelled by the complainant, Deputy Inspector General of Police, Tirunelveli Range, Praveen Kumar Abinapu ordered the dismissal of Vanitha Rani, Senthilvel and head constables Ramesh and Jose from service.

While Vanitha Rani is now working in Virudhunagar district, Senthilvel is serving in Nagercoil in the traffic wing. Head constables Ramesh and Jose are working in Kottar and Colachel respectively.