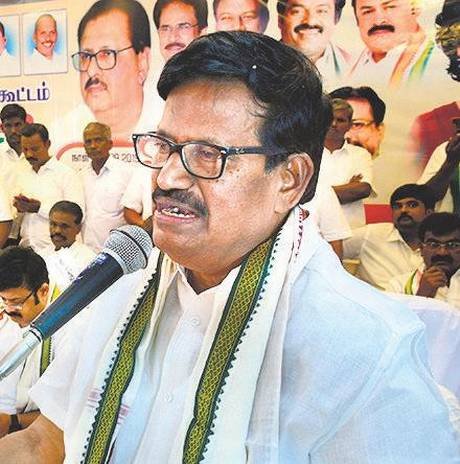 Chennai/Tirunelveli: “Leaders and workers of our alliance parties are ready to strive for the victory of the Congress in Nanguneri”. That statement by TNCC president K S Alagiri at his brief media interaction here on Saturday sounded like an honest confession about the pathetic public support the Congress now enjoys in the Dravidian State. It could also be a frank admission of the party’s poor membership base here.

The PCC chief spoke to the media persons at the DMK headquarters soon after senior ally and DMK president M K Stalin’s presser announcing the allocation of Nanguneri (Tirunelveli district) to the Congress while keeping Vikravandi (Villupuram district) for the DMK in the by-elections on October 21. The Congress also got Kamaraj Nagar in Puducherry, which all in effect meant that the two parties retained claim to the seats they had won in the 2016 polls.

The Congress delegation led by Alagiri and comprising senior functionaries such as former PCC presidents M Krishnaswamy, Kumari Anandan and K V Thangkabalu, had called on Stalin at the Anna Arivalayam to ‘negotiate’ the Nanguneri seat allocation. There wasn’t much to negotiate since the by-election for this seat was caused by its Congress legislator Vasanth Kumar getting elected to the Lok Sabha from the Nagercoil constituency in May.

A few media reports spoke of the strong possibility of Kumari Anandan being given the Congress ticket for Nanguneri, considering he is the brother of Vasanth Kumar. But then, Anandan is pretty old at 86 and has not been so successful politically, particularly during his adventure floating own party, ‘Gandhi-Kamaraj National Congress’.

Other names are popping up aplenty, such as Peter Alphonse, ex-MP/ex-MLA and a local Congress functionary named SKM Sivakumar. The latter had caused a flutter issuing a statement and getting a resolution passed by the Nellai East Congress Committee declaring that Nanguneri must remain with the Congress and should not be given away to the DMK in the alliance. It is said that Sivakumar, who owns a prosperous chain of furniture showrooms in Nellai, is very keen on contesting and could give a tough fight to old warhorse Peter in the party’s candidate-selection exercise.

Considering the poor organisational strength of the Congress party and the inherent squabbling among its various functionaries, the ruling AIADMK is most likely to focus its ‘energies’ and manpower-including the Ministers en masse-on wresting Nanguneri. DMK chief Stalin has reportedly mentioned to his senior colleagues that the party must concentrate on retaining Vikravandi.

True, winning or losing at Nanguneri and Vikravandi will make no big difference in the Assembly for any of the main contesting parties, the AIADMK, DMK and the Congress-considering that the ruling party is firmly in the saddle with 123 members whereas 117 is the safe halfway mark in the 234-strong House. The DMK has 100 MLAs. However, winning the two by-polls or at least one of them could significantly improve their political image in the state.

And as things stand now, it could take huge effort for the AIADMK to score at Vikravandi whereas Nanguneri might not pose any big problem.