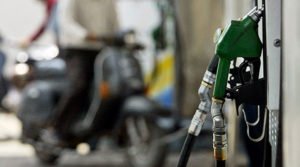 After a day’s lull, the upward march of fuel prices resumed Thursday with petrol price being hiked by 13 paise per litre to RS 81 per litre and diesel by 11 paise to Rs 73.08 a litre, according to a price notification of state-owned oil marketing companies.

Delhi has the cheapest fuel rates among all metros and most state capitals because of lower taxes. Mumbai has the highest sales tax or VAT, according to PTI. The Delhi High Court Wednesday said that daily change in fuel prices was an “economic policy decision” of the central government and the courts must remain away from it.

The same day, the West Bengal government reduced the price of petrol and diesel by Re 1 per litre. Chief Minister Mamata Banerjee announced this at the state secretariat, Nabanna, and also asked the central government to withdraw central cess from fuels to relieve the common man. While, the Maharashtra government is planning to push its proposal to include petrol and diesel under the Goods and Services Tax (GST) as a measure to bring down their prices.

Reacting to the fuel price hike, BSP chief Mayawati had said Congress and the ruling BJP were equally responsible for rising fuel prices. Mayawati said the BJP was following the same “wrong economic policy” which the Congress-led UPA II government executed, became “unpopular” and lost power in 2014. Congress and other Opposition parties had observed Bharat Bandh Monday against the rising fuel prices.

On Monday, the ruling Bharatiya Janata Party (BJP) had termed the hike in petroleum products as a ‘momentary difficulty’ owing to an international crisis after the Opposition parties in the country observed a Bharat Bandh, to protest the skyrocketing fuel prices.