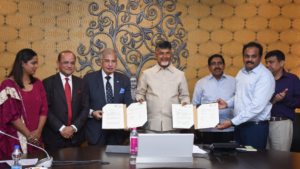 Addressing a review meeting of Andhra Pradesh Capital Region Development Authority (APCRDA) at the Secretariat today, the Chief Minister said that proposals should be made to beautify the bunds of Krishna river and three canals passing through the city.

Chief Minister Chandrababu Naidu directed the CRDA officials to beautify Krishna river bunds downstream Prakasam Barrage in Vijayawada. He suggested the construction of a platform at the central point of the river bed with the national flag on it and beautification of bunds on both sides. He said that an atmosphere should be created where people can come and relax in the evenings.

A delegation led by Ram Buxani of UAE, President, Business Leaders Forum came forward with a proposal to develop two islands in Krishna river. The Forum of Ministry of Economy, UAE, Indian Embassy and Consulate General in UAE offered proposals to develop PGA State Golf Court, Hotel complex, Convention centre, recreation villas and apartments in nearly 500 acres of both the islands. Later they signed an MoU with the government of Andhra Pradesh. The officials informed the Chief Minister that 7 islands in Krishna river out of total 14 islands can be developed.

Referring to the development of the Film and Television industry, D Suresh Babu, Film Producer said that initiatives should be introduced to make sure that talent from across the State is recognised. He also said that the government should extend support for the development of world-class Film and TV training institutes in Amaravati capital region. Describing Amaravati as the most beautiful and livable city of future, he said that a thriving movie-watching culture will bring business opportunities to the industry.

The Chief Minister said that content preparation plays a key role in all the sectors in the present times. He said that Producers should come forward to produce films in AP as abundant local talent and picturesque locations are available here. He also suggested that 9 committees with experts of the respective fields would be appointed for the development of 9 sub-cities in Amaravati.

Digital house numbers with QR code and Daari (a smart navigation app) will be introduced in AP. The Chief Minister asked officials to make the services more people-friendly and work with determination to increase public satisfaction level.