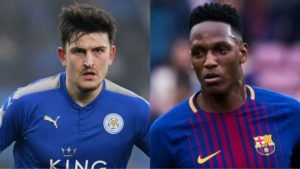 Sky Sports News reported last week that United had made an approach to sign Maguire, who they value at £65m, but Leicester are adamant the central defender will not be sold.

It now looks like Maguire will stay at King Power Stadium, and Sky Sports News expects Leicester to open talks over an improved contract in the coming weeks.

It is though United could seal the deal for Mina from Barcelona for as little as £30m, just seven months after they signed him from Brazilian club Palmeiras for £10m

Mina but has been linked with a move away from the Nou Camp after struggling for a place in Ernesto Valverde’s starting XI appearing just four times in La Liga.

He was more successful at the World Cup this summer, where he scored three goals in as many games for Colombia – including the last minute equaliser against England in the last 16.

Wolves and Everton, who have already bought Mina’s former Barcelona team-mate Lucas Digne, are also interested in signing the centre-half, according to Sky sources.