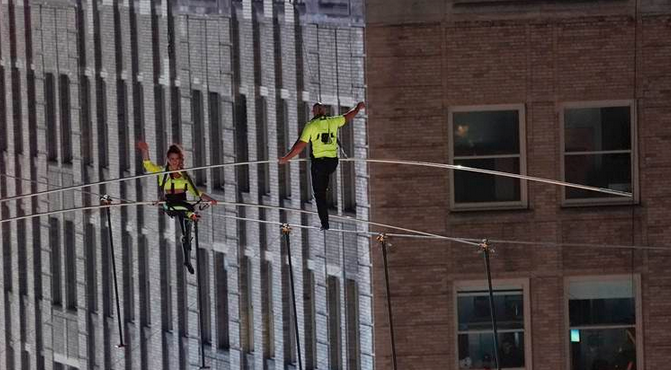 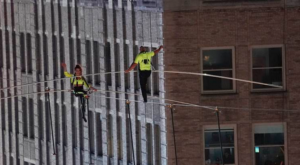 Ali, 30, looked up from his steaming hot dog cart on West 45th Street on Sunday night and gazed up at a wire rigged along the length of Times Square between two skyscrapers, 25 stories above street level.

“It’s crazy — they are walking through the sky,” said Ali, who for the moment had no customers.

They, along with throngs of onlookers — whether tourists or jaded New Yorkers — were staring, necks craned, toward the night sky to watch Nik and Lijana Wallenda walking a wire high above Manhattan.

The siblings — members of the Flying Wallendas circus family — held balancing poles and started on opposite sides of a 1,300-foot wire, strung between 1 Times Square at the south end at 42nd Street, and 2 Times Square, just north of the TKTS booth at 47th Street.

They slowly moved toward the center of the wire, where they met and embarked on the delicate process of passing each other.

Wallenda lowered herself and sat carefully on the wire as her brother skillfully stepped over her.

Then they both proceeded on their separate ways to complete the stunt.

“Maybe the biggest surprise was that the wire was as stable as it was,” Wallenda said afterward.

The wire walk had the feel of an old-time spectacle, and spectators who packed Times Square seemed for the moment immune to the flashy billboards and other distractions.

Wallenda began slowly from the north end of the wire.

“There he goes,” said Douglas Klein, a landscaper from Corvalis, Oregon, who was on vacation in New York, along with his sister Becky Bernosky and her daughters, Laci, 15, and Lindsey, 11.

“It all seems kind of scary because I don’t want him to fall,” Lindsay said, staring up at Wallenda.

“I don’t even like heights, so I can feel my heart racing,” said Christina Divne, who was visiting New York from Stockholm with her family, as the Wallendas walked overhead.

She said the walk might have been more exciting if the Wallendas were not wearing safety harnesses, “but it would also be more messy if they fell to their deaths doing this.”

After they crossed in the middle of the wire, Nik Wallenda finished more quickly than his sister. Then the crowd cheered heartily as if to buoy Lijana Wallenda to a safe finish.

For Lijana Wallenda, 42, the walk was her first high-wire attempt since a 2017 accident in which she and four other walkers fell 30 feet off a tightrope during a rehearsal and were seriously injured.

After the walk, Nik Wallenda said he became emotional when meeting his sister in the middle of the wire.

“It was hard to hold it together,” he said.

Nik Wallenda said some of the flashing billboards were dizzying and difficult to prepare for.

“How do you duplicate Times Square and the distractions?” he said.

However, not all the distractions were bad: Nik Wallenda said the roar of the crowd was enthralling.

“We’re entertainers — we live for that,” said Nik Wallenda, who has been walking tightropes since childhood.

In 2012, he walked a wire over Niagara Falls, and in 2013, he traversed the Little Colorado River Gorge near the Grand Canyon.

New York City’s love affair with death-defying stunts is well established, dating at least to Houdini’s 1912 escape from handcuffs, leg-irons and a sealed, weighted crate that was submerged in the East River.

Harry Houdini did it more than a century ago when he was shackled inside a packing crate and plunged into the East River.

Daredevil Evel Knievel, dressed in his trademark red, white and blue leather jumpsuit, managed to do it in 1971 when he jumped his motorcycle over nine cars and a van in Madison Square Garden.

Three years later, Philippe Petit aimed for the same effect when he walked a wire between the twin towers of the World Trade Center.

The siblings are part of the Wallenda family, whose performance history dates back to the Austro-Hungarian Empire in the late 1700s.

As for what wire walk Nik Wallenda should tackle next, the hot dog vendor, Ali had his own opinion.

“I’m Egyptian, so of course I think his next trick should be walking between the pyramids,” Ali said.

The family, whose performance history dates back to the Austro-Hungarian Empire in the late 1700s, made their American debut in 1928 as part of the Ringling Brothers and Barnum & Bailey Circus at the old Madison Square Garden, not far from where the Wallendas executed their stunt Sunday night.

The Wallendas were following in the footsteps of daredevils like Houdini, who in 1912 escaped from handcuffs, leg-irons and a sealed, weighted crate that was submerged in the East River.

Petit, even after being arrested and charged in connection to his World Trade Center feat, was permitted to walk a wire, untethered, over Amsterdam Avenue to St. John the Divine Cathedral in Manhattan in 1982.

In 2006, the illusionist and endurance performer David Blaine spent seven days submerged in a water-filled sphere at Lincoln Center in Manhattan.

But alas, times are tougher these days for performers seeking city approval for such stunts.

In 2013, Nik Wallenda wanted to walk a wire strung between the Chrysler Building and the Empire State Building, but was unable to get permission from city officials.

The Wallendas were able to get approval for Sunday’s walk provided they wear safety harnesses. While removing a certain element of danger, this ruling also made the 20-minute walk more difficult, and there was no safety net.

“It’s like putting handcuffs on somebody and saying, ‘Now walk the wire,’ ” he said, adding that he would wear cameras and other equipment. “It’s a lot of gear and it adds more and more stress.”

Sunday’s wire walk, which was broadcast live on ABC, would be more challenging than the one he envisioned for 2013, Nik Wallenda said.

“The other walk, I would have been so high up and out of the mix,” he said. “In Times Square you have these crazy LED billboards distracting you the entire walk. You have thousands of people below, the city lights, the sirens, the horns. This is the most exciting walk I could do in New York City.”

Nik Wallenda said he and his crew had had a window of less than six hours to rig the wire while Seventh Avenue was shut down overnight. It was 1,300 feet long and strung between 1 Times Square at the south end of the open area of Times Square at 42nd Street, and 2 Times Square, just north of the TKTS booth at 47th Street.

It was a fraught process that involved avoiding power lines and construction zones, he said.

“It was a massive undertaking, setting a quarter-mile cable that really involves rigging 4 miles of cable when you include the stabilizing lines,” Nik Wallenda said.

After the walk, Nik Wallenda was asked what his next performance would be.