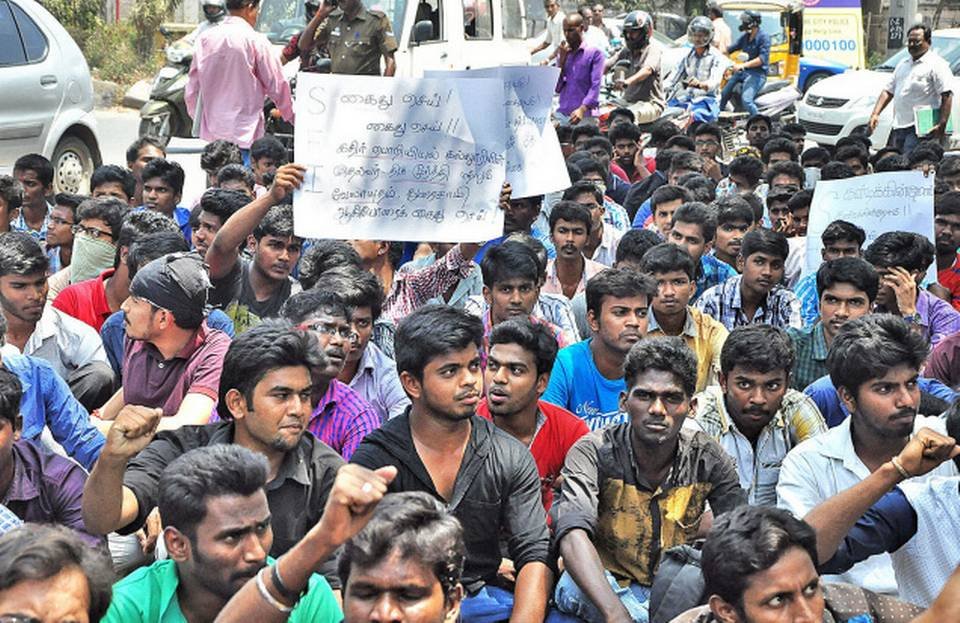 Students of Kathir College of Engineering along with the members of Students Federation of India and All India Students Federation staged a protest in front of the Coimbatore Collectorate on Friday demanding an impartial probe into the alleged suicide of third year civil engineering student C. Vignesh (23) and sought action against those who pushed him to take the extreme step.

The students in their petition said that on March 9 (Wednesday), when Vignesh returned to college after participating in an inter-collegiate event, the College cashier Velayudham pulled him aside for an inquiry. There, the cashier, warden Prakash and others charged him with indulging in a group clash with second year mechanical engineering students. The student, who had nothing to do with the incident, pleaded his innocence. They interrogated him till 11 p.m. and again on Thursday. The students alleged that the three forced him to confess in writing to his involvement in the group clash and returning to the college hostel under the influence of alcohol. Heartbroken, Vignesh hanged himself in a hostel room, the protesting students said.

The student’s mother C. Shanthi, a CRPF constable in Bengaluru, said that the college authorities harassed her son and prevented her from reaching out to him on Wednesday evening and Thursday morning. She kept dialling his number. The warden who picked the phone in the first instance mumbled a few excuses for Vignesh not picking up the phone and on further queries he chose to cut the call and never answered the phone thereafter.

Later, Vignesh called her from a landline phone and had told that the college authorities had forced him to write a confession, she said. On Thursday evening, one of his classmates conveyed the news of Vignesh’s suicide. The College secretary, Lavanya Kathir, said that when Vignesh returned to the hostel on Wednesday he was reeking of alcohol for which the authorities had warned him. They also took it to the notice of Vignesh’s mother. But his drinking was only a minor issue as the college authorities were seized of the group clash issue between mechanical engineering and civil engineering students.

On Thursday morning too, the college authorities inquired him but it was for not long, as alleged by those trying to twist facts to suit their convenience. Plus, the student had failed in a semester examination, the result of which was announced only a few days ago. Being in third year, Vignesh could have felt embarrassed as it could affect his placement prospects. All these things could have forced him to resort to the extreme step, she said.

The college could consider compensating the mother for the boy’s loss but the first task at hand was to make the mother realise that the college had nothing to with Vignesh taking a wrong and extreme decision. Ms. Kathir denied the allegation that the college authorities concerned were missing to escape police action. The management would reopen the college on Monday and take action against those students who had damaged vehicles and canteen after learning about Vignesh’s death, she added. Meanwhile, Ms. Shanthi collected her son’s body after post mortem at Coimbatore Medical College Hospital and cremated it at the Nanjundapuram crematorium.