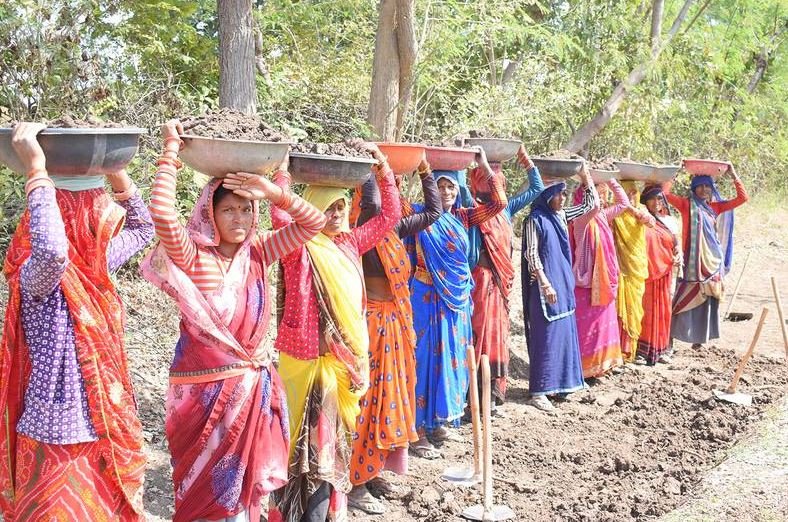 On World Water Day 2022, Indian women are pulling together

As the mercury soars to 37°C, Neelam Jha is back to holding meetings with a group of women to review water availability in their parched village in Bundelkhand – India’s most arid region.

Ms Jha, 30, is a Jal Saheli, or “Friend of Water”. She forms part of a network of about a thousand women, mostly illiterate, who are on a mission to conserve water in the region.

“Summer is here and soon ponds and wells will dry up. We have to make sure that every house gets sufficient water,” Ms Jha told The National. She said women face the brunt of the water crisis.

In the coming weeks and months, the group will embark on the annual task of reviving water sources by digging wells and ponds, and constructing small reservoirs, to harvest rainwater in the drought-prone region.

India, with a population of 1.3 billion people, has only four per cent of the world’s freshwater resources, leaving tens of millions without reliable access to potable water.

More than 600 million Indians face high to extreme water stress, according to a 2019 report by government think tank Niti Aayog.

The report said about 200,000 people die due to the water crisis every year and that if no action is taken, 40 per cent of India’s population will have no access to drinking water by 2030.

The water crisis here is perennial, but over the decades it has been aggravated by climate change, which has depleted aquifers and made rain increasingly scant.

Every year, as winter gives way to eight months of blistering heat, water in ponds and wells evaporates, setting off an recurring ordeal for the region’s women and children.

India is a largely conservative society, with gender roles strictly adhered to in rural areas, where women are primarily responsible for managing the household.

Ms Jha had only one purpose: fetching water for her family of six from the only handpump in the village.

Simravari, where she is from, has only one handpump for its population of 1,200.

Whether or not she was sick, tired, or pregnant, she walked two kilometres every morning and evening carrying three vessels on her head to the handpump to fetch water for cooking, cleaning and bathroom use.

“I had to make at least 10 rounds to the handpump a day but my husband never helped because men were supposed to work on fields … we faced discrimination and mental torture,” said Ms Jha, who has three children.

The water crisis has caused a cascade of consequences, forcing men to migrate to other places in the face of failing crops and overall economic distress.