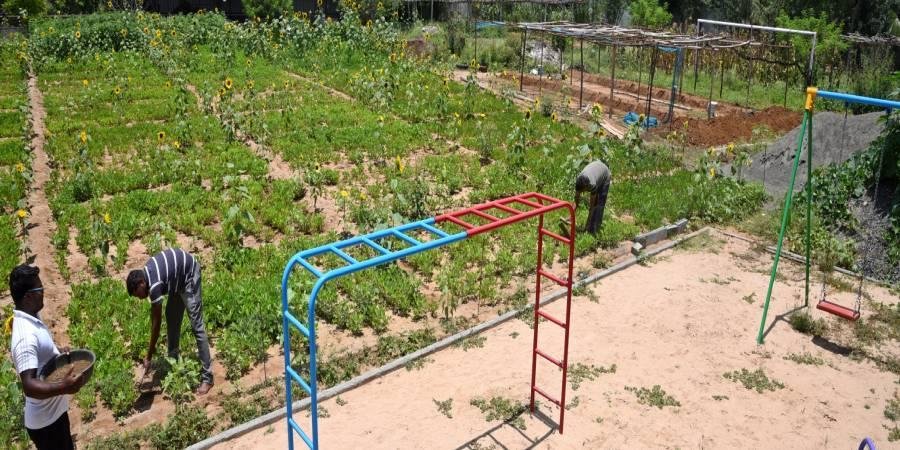 The management of St John’s Matriculation Higher Secondary School, in Sakthi Nagar near Veerapandi Pirivu, has been growing organic vegetables in grow bags since 2016.

COIMBATORE: At a time when much of the resources of educational institutions are lying unused due to the Covid-induced lockdown, a private school in Coimbatore has put its playground to good use: to grow vegetables organically.

The management of St John’s Matriculation Higher Secondary School, in Sakthi Nagar near Veerapandi Pirivu, has been growing organic vegetables in grow bags since 2016.

However, it is during the lockdown period when a portion (75 cents) of its playground spread across 1.5 acres was converted for the purpose. A total of four school teachers have been taking turns, after their online classes in the morning, to take care of the organic farm.

The school’s Correspondent RP Aravinthan said that the teachers volunteered to work for the job and are feeling contented to stay close to nature, even as they are teaching.

A 30-year-old Tamil teacher of the school A Sakthivel said that had to go to his hometown (Tiruchy) after the lockdown was imposed. “I worked in farmland there. I loved it. But I was missing teaching. Now, after my return, I can do both.”

In January 2016, the management invited BN Vishwanath, President of Garden City Farmers, an NGO based in Bengaluru, to share his insights to students on organic and urban-terrace farming. During the event, the school mooted the concept of providing grow bags (sown with native seeds) to students on their birthdays. Soon, the management adopted the concept of making students from Class I to III to grow vegetables in grow bags on the school premises.

Baskar said, “After allocating 75 cents of space. We are growing watermelon, sunflower, sesame, ladies finger, cowpea, and groundnut. After selling the produce, we will distribute a portion of the profit among the teachers.”

The school has a collection of several native seeds procured from seed festivals in Kerala and Karnataka. The management also shares seeds to like-minded people by uploading posts on a Facebook page – ‘The Indian Organic School’. This is the only English-medium school offering  Agricultural Science stream for higher secondary students in the State, Baskar said.